After Jiang Huan tidied up and came out, the two had tacitly agreed to ‘forget’ that morning’s kiss.

Gu Shengyin stayed at Jiang Huan’s manor for another day before saying her goodbyes.

After all, she was a serving official, and had far less freedom and time than a wealthy prince like Jiang Huan.

Jiang Huan didn’t try to convince her to stay, and simply said that he coincidentally needed to enter the palace, and could travel together with her.

They traveled back in the same average blue carriage, with the same unfathomable coachman.

After entering the city, Gu Shengyin disembarked from the horse carriage. After bidding Jiang Huan farewell, she headed towards Fu Mansion.

Jiang Huan headed directly into the palace. He still kept in mind the words that Gu Shengyin had spoken to him while drunk. Since Princess Shuhe had already blatantly said such things, there was already a chasm between the two. In the future, if they became husband and wife, it would inevitably breed resentment.

He planned to try to persuade the emperor to change his mind, but he couldn’t speak rashly. Today, he wanted to test the waters first.

Gu Shengyin had headed straight back to the mansion. When the servant at the door saw her arrive back, he said while bowing in greeting: “General, the old general has ordered for you (formal) to see him when you return.”

“You still know that you should return? Where were you these last two days?” Old General Fu questioned fiercely, looking at this heroic-looking daughter. She disappeared for two days without cause, and didn’t even send a message, did she not even think about whether or not her family would worry?

Old General Fu was angered by her indifferent attitude: “Don’t you dare forget your identity! You need to be reserved when making friends!”

Gu Shengyin immediately understood that he was emphasizing her female gender, and that she must not reveal her secret.

To be honest, as a transmigrator working to complete a task, she was familiar with the world’s plot, and knew that the old general actually did care about his daughter, but he had spent his whole life rigidly, and never spoken gentle words. Even when he spoke words of concern, it seemed more like he was lecturing instead.

After hearing such words, Gu Shengyin suddenly laughed, lifting her head to meet his gaze: “Father has worried needlessly. This child was in the army for so many years, and has prospered and matured1 accordingly. Father can rest assured, this child will not let the reputation of the great God of War family be ruined in my, Fu Yunzhen’s hands.

Seeing the clear mockery in his daughter’s eyes, old General Fu was silent for a while.

He had always known, that this child2 had held grievances against him in her heart.

Indeed, for the so-called glory of the family, he had selfishly controlled her life. From the moment he had made the decision that their General household had born a ‘young master’, he had doomed his daughter’s whole life, taking away her chance to live a normal life.

His face was dejected: “You hate me.”

Gu Shengyin’s face remained unchanged: “This child dare not.” Dare not, not does not.

Old General Fu was left alone in the room. He stood there for a long while, before carefully3 taking out a painting scroll from the study’s hidden safe.

He slowly rolled out the scroll, and on the slightly yellowed paper was a beautiful woman with a charming smile.4

If one looked carefully, one could see that this woman’s appearance was seven-tenths similar to Fu Yunzhen, except that the painted woman’s smile was warm and gentle, while Fu Yunzhen brows held a more heroic air.

“A’Xin, I truly was wrong, I really was wrong back then…” The calloused hands slowly stroked the painting, and no one was there to hear the old man’s regret.

posting this without reviewing it;; currently dying of a stomach virus rn might have to go to the ER

as someone who has to deal w (a much less extreme) situation like FYZ, reading about this old Fu honestly just brings up my temper; there are parents who mistreat their children in the hopes of them being successful, are misguided as all hell, but old Fu isn’t even doing it for FYZ, he’s just doing it for reputation;;

and that’s just another thing that i kind of hate about traditionalist culture; on how reputation or 面子 ‘face’ just supersedes everything else (including your children’s happiness or mental health) sometimes

风生水起 – fēng shēng shuǐ qǐ – means to prosper, or do very well; but this is an idiom about how once one thing goes well, everything else develops well quickly, kind of similar to the momentum of a rock rolling down a slope;; in the context for Fu Yunzhen, I see it as, after suffering in the army when she was forced into it by her father, her perseverance led to her slowly climbing up to prosperity; and also that the early hardships forced her to mature quickly
– the idiom itself is based off a legend that a pair of brothers in a poverty-stricken fishing village caught a pair of fish but couldn’t sell them, so they brought it back with them to eat; but they were so poor that they couldn’t even afford firewood or kindling so they had to eat the fish raw;; afterwards, they succeeded in catching fish every day and ended up prospering, but they never forgot their days of poverty, and always ate raw fish (with seasoning to make the taste better since they could afford it) during the Spring Festival to honor that.

I feel like it’s important to specify that, in the raws, old Fu literally says ‘this child’ in a manner that can refer to any child (someone else’s child, some random child on the street, etc) instead of calling her ‘his child’; I haven’t read any of the later chapters at the time of writing this, but in fact, I don’t think he directly calls FYZ ‘his child’ or ‘his daughter’ a single time so far, but rather just ‘this child’ or ‘daughter’ (literal translation, female child)↩

小心翼翼 – xiǎo xīn yì yì – means super cautiously, meticulously, carefully (all together); treating something carefully, and reverently and seriously; the literal translation is something like your heart is on wings (idk if that means the same to you as it does to me but idk how to explain it from how my head understands it);; also this man treats a fucking picture of his dead wife infinitely better than his living daughter…↩

this note doesn’t actually affect the story or context, but just in case y’all are interested↩
巧笑倩兮 – qiǎo xiào qiàn xī – is actually a reference to a poem, and there are 7 lines that describe the beauty of Zhuang Jiang, some ancient lady that i don’t actually know bc all my chinese knowledge comes from self-study when i have free time; but the poem is beautiful, it uses a lot of metaphors and allusions to describe her beauty
i searched up the translation, and it reads kind of horrifying, but that’s kinda the pain of trying to translate chinese, not to mention poems are infinitely harder; i linked it if you’re interested, but keep in mind that the meanings as well as order of some lines have been rearranged to fit an ‘english poem’ format
also I haven’t included pictures in a while, so here’s an example of how FYZ’s mom would’ve looked (and how portrait scrolls ACTUALLY were painted lol);; looks like an expectations vs reality comparison 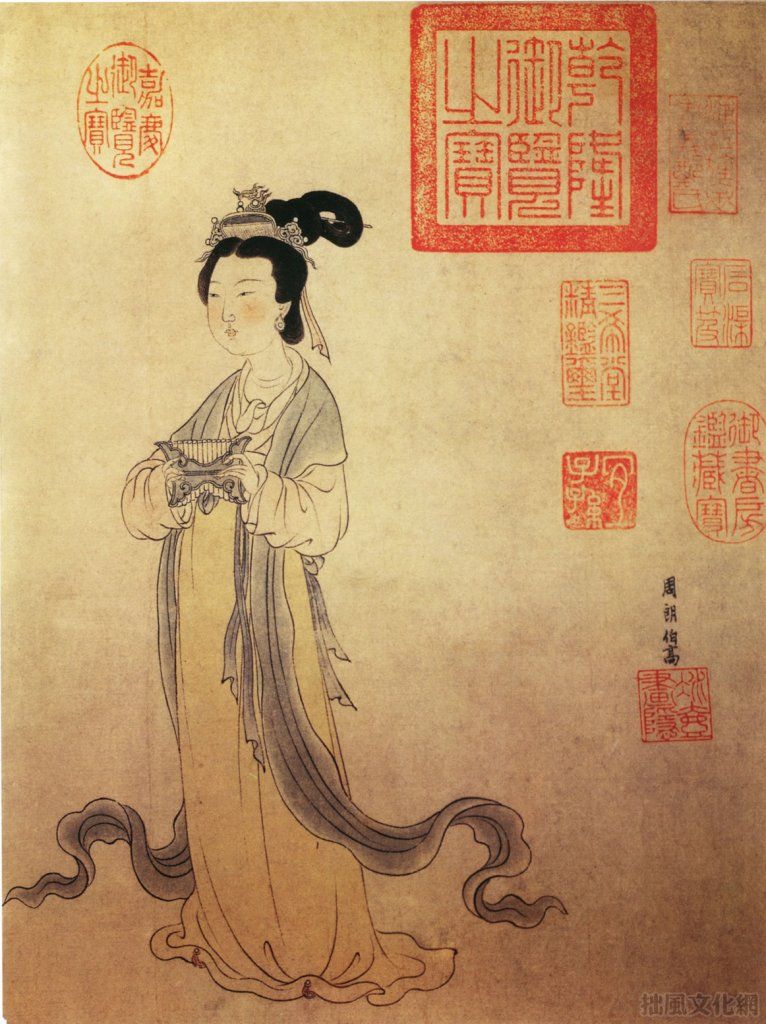