Later when she lifted the flap of her tent, she found that a bonfire had already been lit outside, the soldiers were each holding a bowl of wine, waiting only on her.

“General, today, with so many of us, we must get you wasted!”

“Yes! We must make the general fall today!”

“Come, General, I toast you a drink!”

Gu Shengyin laughed as she slapped open a jug of wine1, lifting it into her hands, laughing loudly: “Alright you all, I see you’ve already come to an agreement to do me in! You had better pray that you can knock me down today, otherwise, tomorrow on the training field, you’ll each get yours one by one!”

Her words made many people reveal looks of hesitation on their faces, and Deputy General Zhang Yuan laughed out loud when he saw: “Don’t be frightened by the general, there are so many of us, it can’t be that we still can’t get him drunk?”

Gu Shengyin cooperated and drank bowl after bowl of wine. She enjoyed this type of atmosphere. Tomorrow, she’d have to return to the irritating and boring capital; since there was wine right now, let’s get drunk first!

She still believed that Her Royal Highness the princess was anxious because she was about to see her betrothed, but she didn’t know that her master’s intentions were completely different.

Jiang Shuhe tightly squeezed the handkerchief held in her hand, still fearful deep inside. She knew that her Imperial Father greatly trusted Fu Yunzhen, who he had even praised as ‘the most important minister of the country’. If her actions were discovered by her Imperial Father……

Her face paled at the thought. Even though she currently received love and favor, her Father Emperor would still discard her.

For a fleeting moment, she thought about canceling the assassination order.

But in the next instant, she thought of her biaoge. If Fu Yunzhen didn’t die, how would she ever get the chance to be wed to biaoge? As she thought this, her resolve slowly firmed.

Fu Yunzhen, if you want to blame someone, then blame yourself for being too much of an obstruction, and blocking this princess’ path!

At this moment, Gu Shengyin knew very clearly that, not too far from the capital gate, hidden among the countless people of the welcoming procession, were the assassins that Second Princess Jiang Shuhe hired to take her life.

However, Fu Yunzhen’s famed title of number one in martial arts within the dynasty wasn’t baselessly earned. This time, Gu Shengyin had made ample preparations. Jiang Shuhe’s plans would have no chances of coming to fruition.

Gu Shengyin’s ears twitched, her figure leaning back upon her horse, dodging the sudden piercing arrows. At the same time, the sharp edge of the bright silver spear that had never left her hand flashed with a cold shine under the sunlight, striking directly at an approaching assassin.

The spear pierced out like a bolt of cold lightning, swift and deadly.

One hit one kill.

During this, the lieutenant guards behind her all pulled out their weapons and formed a defensive circle. Based on their actions, it was clear they had been prepared.

“Leave me one alive! This General really wants to see, at the gate of the Imperial Capital, at the feet of the Son of Heaven, who exactly is it, with the courage to swallow the Heavens!” Gu Shengyin coldly shouted, brows furrowed, eyes chilly and murderous.

“Princess, bad news!” The maid who was sent out to inquire about the situation ran back in with a look of panic.

Could it be that it succeeded? Jiang Shuhe jumped up jubilantly, trying to suppress the joy that surged in her heart, asking with a look of concern: “What has occurred?”

The maid said: “Responding to Your Royal Highness, nubi just heard the news, when General Fu was returning to the Capital, he encountered assassins!”

Jiang Shuhe’s heart filled with expectations, hurriedly continuing to ask: “And the general? Did something happen?”

the last line, where Jiang Shuhe’s asking ‘did smth happen?’; in Chinese, phrasing can be interpreted multiple ways, 可有事？could be asking if there’s something wrong, but it could also be her expecting with hope that there is something wrong

Chinese alcohol is traditionally brewed in these jugs and can vary in size from the size of a man’s hand to almost the size of a woman; also I’m using the word ‘wine’ but it’s not actually western red or white wine made from grapes. Chinese people drink baijiu, which is a distilled alcohol made from grain, and they also drink rice wine, flower wine, medicinal wines etc↩ 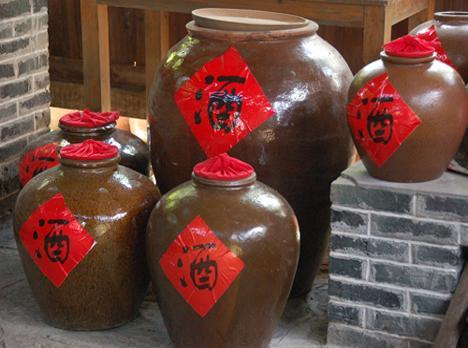 One thought on “HAWRR Chapter 380”